Click the cover to check out the November/December 2021 issue!
READ NOW
s.w.a.t.
Interviews

When Aaron Rahsaan Thomas set out to reboot the legendary pulp classic of a mid-'70s cop show called S.W.A.T., there was a key and specific change he began with: "A lot of people may not realize this," he says, "but the original show was not set in Los Angeles, but in a fictional city.

"The very first S.W.A.T. team was created in Los Angeles, the city that has perhaps the most notorious relationship between their police department and communities of color. I feel like if you're going to tell that story, you lean right into that—what is the reality of a Black police officer in the city of Los Angeles?"

As from-the-headlines as the show has become, given recent national struggles, Thomas knew he could revisit the world of cops chasing bad guys with a new kind of messaging: "Even as we pitched the show to CBS, [co- showrunner] Shawn Ryan and I approached the material about the tension between police and the community feeling that it's not so much that it's a timely topic as it is a timeless one."

Bring The Action With Emotion

That belief meant that even at S.W.A.T.'s unveiling, before the deaths of George Floyd, Breonna Taylor, and other such tragedies, the tensions encapsulated in the seeming dichotomy of Black Lives Matter/Blue Lives Matter already were key to the show's approach. It was crucial to the vision that lead actor Shemar Moore's Hondo character be a Black man from a working class Black neighborhood.

Thomas was confident he could meld the show's "kick-ass set pieces" with emotional character insights. As a key player in the success of such series as CSI: NY, Southland, and Friday Night Lights, Thomas was grateful that "I've been able to pick up a lot of really helpful habits and techniques as to how you manage a show and put a story together."

The S.W.A.T. team, ready for action

Thomas had been scouting locations for Season 3's finale when the pandemic clamped down. Along with the traditional "A" story (a nefarious plot by a murderous cartel boss), aspects of the city's racial legacy came to the fore.

"Our finale was already going to deal with the flashbacks that help to tell the history behind the LAPD and the community—a story about a young Hondo back in 1992, when his [sometime Black Panther] father was a young man. That was in place before a lot of the unrest happened." 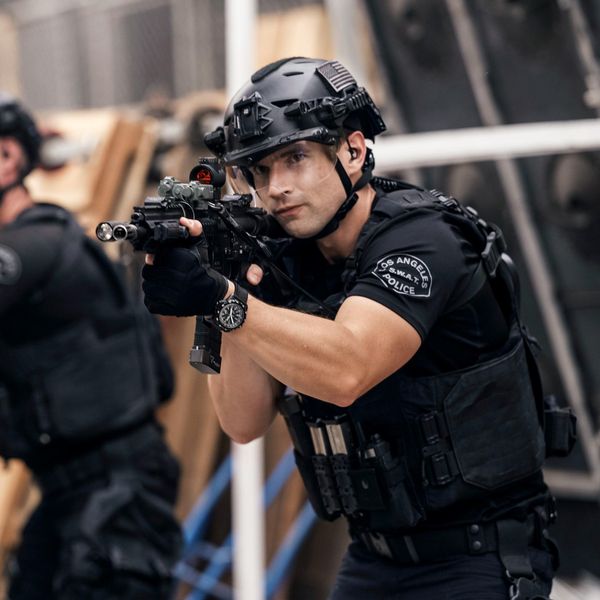 Finally, COVID-19 had to be addressed. In scenes involving multiple people, "there are masks and responsible distancing ," Thomas says. Still, he promises that the characters will feed into the action, "to keep up the pacing of a high-octane show that has momentum. This is an urgent, lean-forward show. We want to keep you on your toes at all times."

From Your Site Articles
Related Articles Around the Web
s.w.a.t.