Tough As Nails Is Back: Meet The 12 New Crew Members!

Season 2 of Tough As Nails premieres Wednesday, Feb. 10 on CBS and CBS All Access.

Real people. Real life. Real tough! Last summer's No. 1 new reality series returns for a second go-round, as 12 new competitors get ready to roll up their sleeves for a shot at the coveted Tough As Nails belt. These hardworking hopefuls come from all walks of life—a steelworker, a travel nurse, a pipe welder, and a retired Air Force Colonel, among others—competing in challenges at real-world job sites (think farms, high-rises, fishing boats).

While there can only be one champ, anybody who clocks out of the individual comp can still win additional cash prizes with their teams throughout the season. "Over the past year, we have a renewed appreciation of the 'essential workforce' that keeps the country running," says creator and host Phil Keoghan. "I'm excited for viewers to meet the new crew members."

Season 2 of Tough As Nails premieres Wednesday, Feb. 10 at 8/7c on CBS and Paramount+. 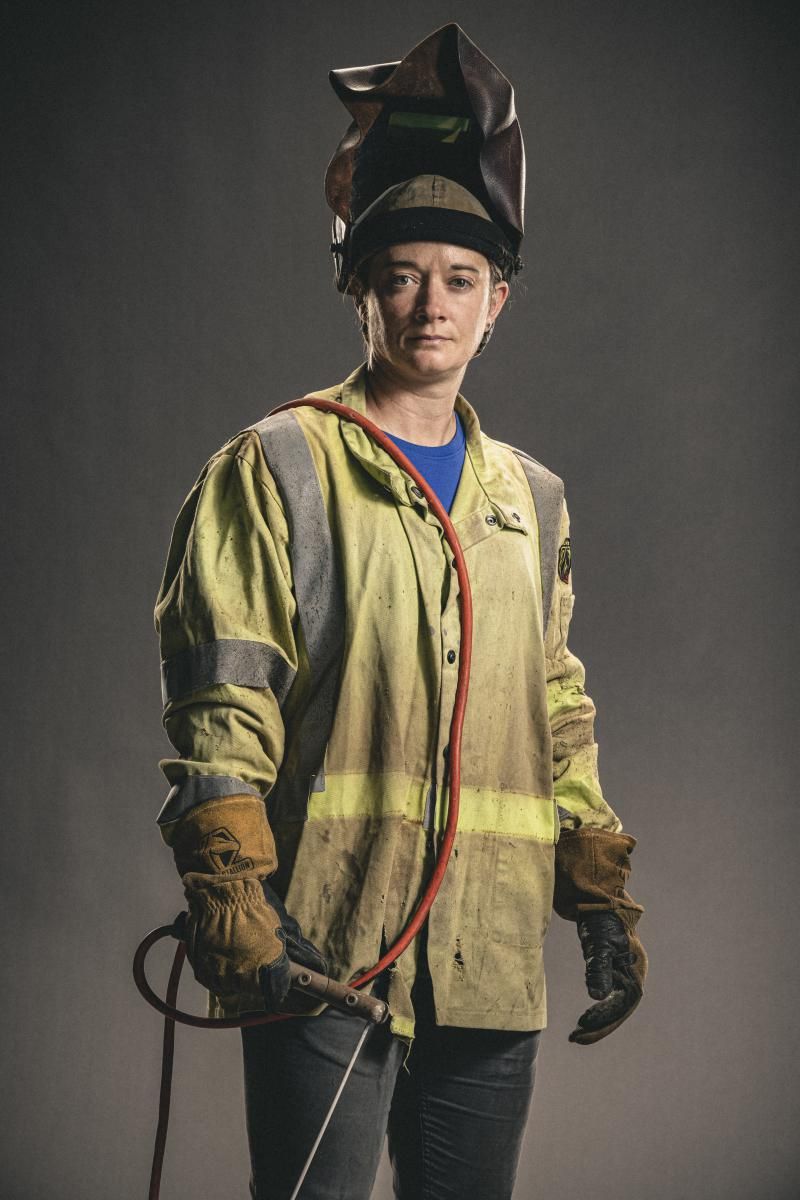 Sarah Burkett from the CBS reality series Tough As Nails.

A driven hard worker with heart, Sarah Burkett is a 41-year-old mechanical pipe welder from Virginia. Burkett was originally denied admission to the police academy because of her Type 1 diabetes. "They said I could not do the physical portion," she recalls. "I fought it and became the first female in the history of the department to achieve a physical fitness award."

What makes Aracelis "Celi" Garcia from Philly tough as nails? "I'm a woman, a nurse, and a diva that's not afraid to get my hands dirty!" The 31-year-old travel nurse is just as straightforward when it comes to why she wants to win. "Because it's $200,000! Who doesn't want a lot of money?" she says with a laugh. "Most importantly, help my family and support my dreams of starting my healthcare business." 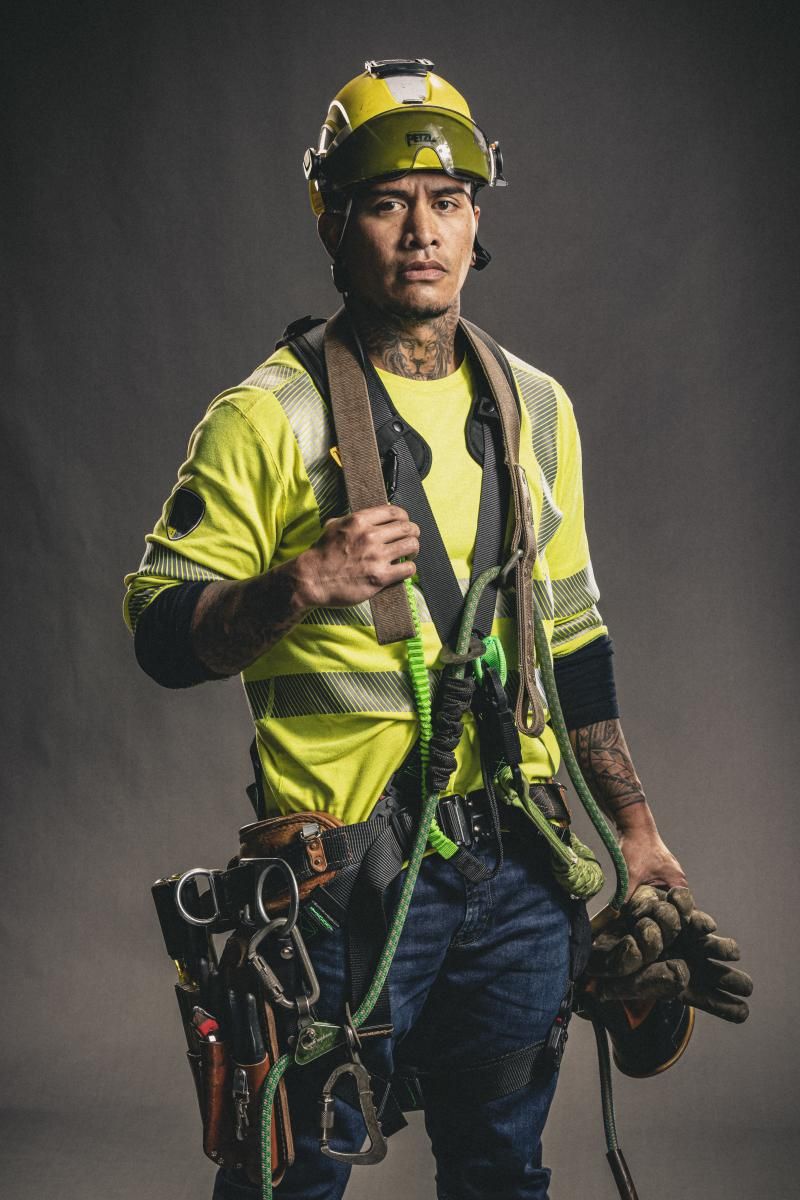 Cyril "Zeus" Ontai III's job as a high-voltage power lineman is considered one of the top 10 most dangerous in the United States. The cost of living in Hawaii, where he comes from, is at an all-time high, so "$200K and a Ford truck would be life-changing for my family and I," he says. "I'd love to start investing in my kids' futures." 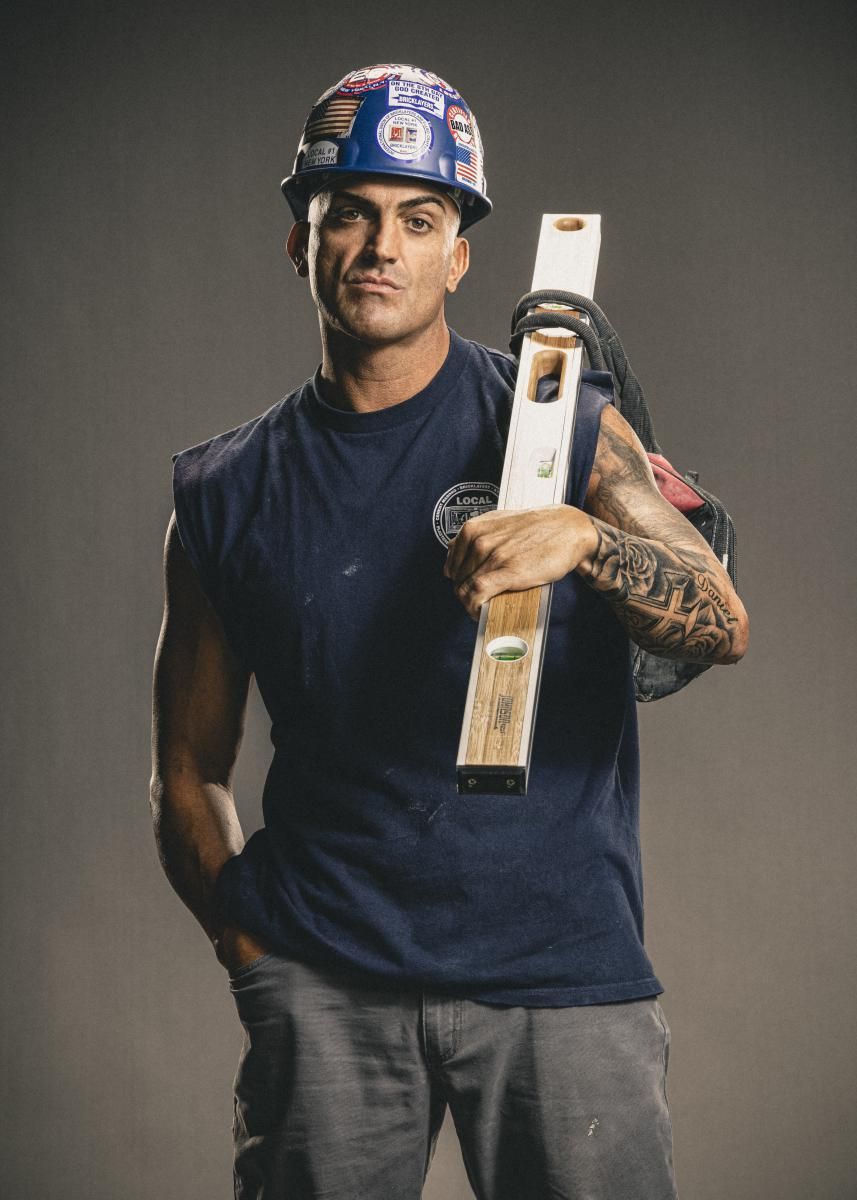 Michael "Eyebrows" Guerriero is a New York City bricklayer working nine-hour days, six days a week. He's lucky to be able to squeeze in a shower and 40-minute gym sesh, but he always makes it home in time to tuck his son into bed. The project he's most proud of? "The school we built on Staten Island for special needs children." He hopes to rely on his physical and mental toughness to carry him over the finish line—and buy a home for his family.

Swifty Sanders from the CBS reality series Tough As Nails.

Swifty Sanders is a man of few words. What is a typical day like for you? "All work, no play," he says succinctly. What makes you tough as nails? "I never quit." Still, the 43-year-old steelworker from Indiana has a shot to let his actions do the talking—by winning the belt and the dough.

Tara Alverson from the CBS reality series Tough As Nails.

Tara Alverson currently calls Endurance, a tugboat in Alaska, home. The 38-year-old mariner works half days, but don't get it twisted—that's still 12-plus hours of pushing fuel, gravel, and heavy equipment. "Whatever it takes to keep the boat floating," Alverson says. Proudest achievement? "Obtaining my officers mates and tow endorsements as a hawsepiper," that's maritime-speak for bypassing the academy to earn one's rank "the old-fashioned way."

As a UPS delivery driver, Patrick "Freight Train" Hargan makes up to 200 delivery stops and pickups a day, delivering as many as 400 packages! But what makes the married dad of two tough as nails? "I've had nine surgeries on different parts of my body, eight pins still in my body, and a pulmonary embolism which could have killed me," he says, "but I am still doing my job and showing the young guys how the job is done right."

Angel Castillo from the CBS reality series Tough As Nails.

Failure is not an option for Angel Castillo, a 29-year-old construction foreman from Miami. "If I fall, I get back up. Even if I were pinned down, I'd find a way to get back on my feet. If you tell me it's impossible, I'll make it possible." Everything Castillo does is for his son—that includes taking home the title. "I want to be an example of hard work, dedication, ambition, and positive energy. I want my son to be proud in calling me his father." 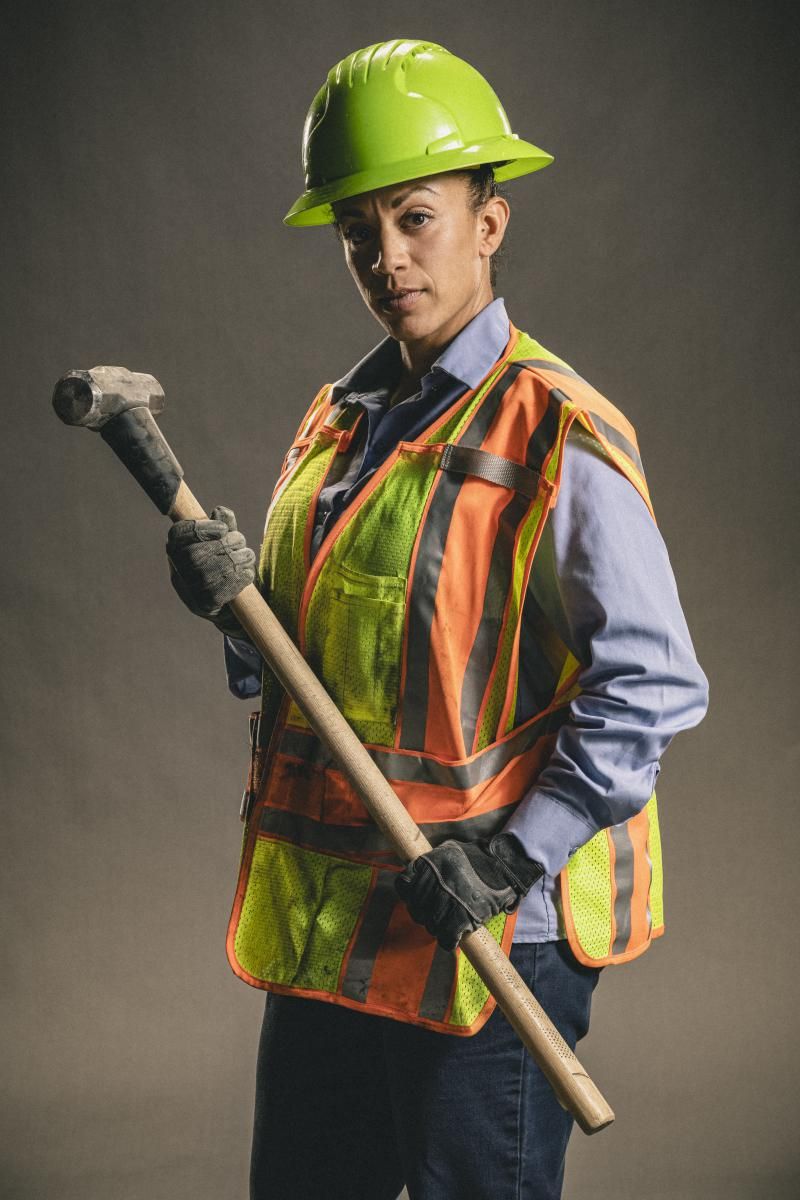 Iraida Mujica from the CBS reality series Tough As Nails.

Iraida Mujica repairs transport tracks, a dangerous job if you're not careful. "In an instant, you can lose your life." The 43-year-old Floridian is out to prove that "you don't have to be super big and super strong to be mentally strong and accomplish your dreams and goals." Can a self-proclaimed born winner with a never-give-up attitude achieve the ultimate goal: the Tough As Nails title? 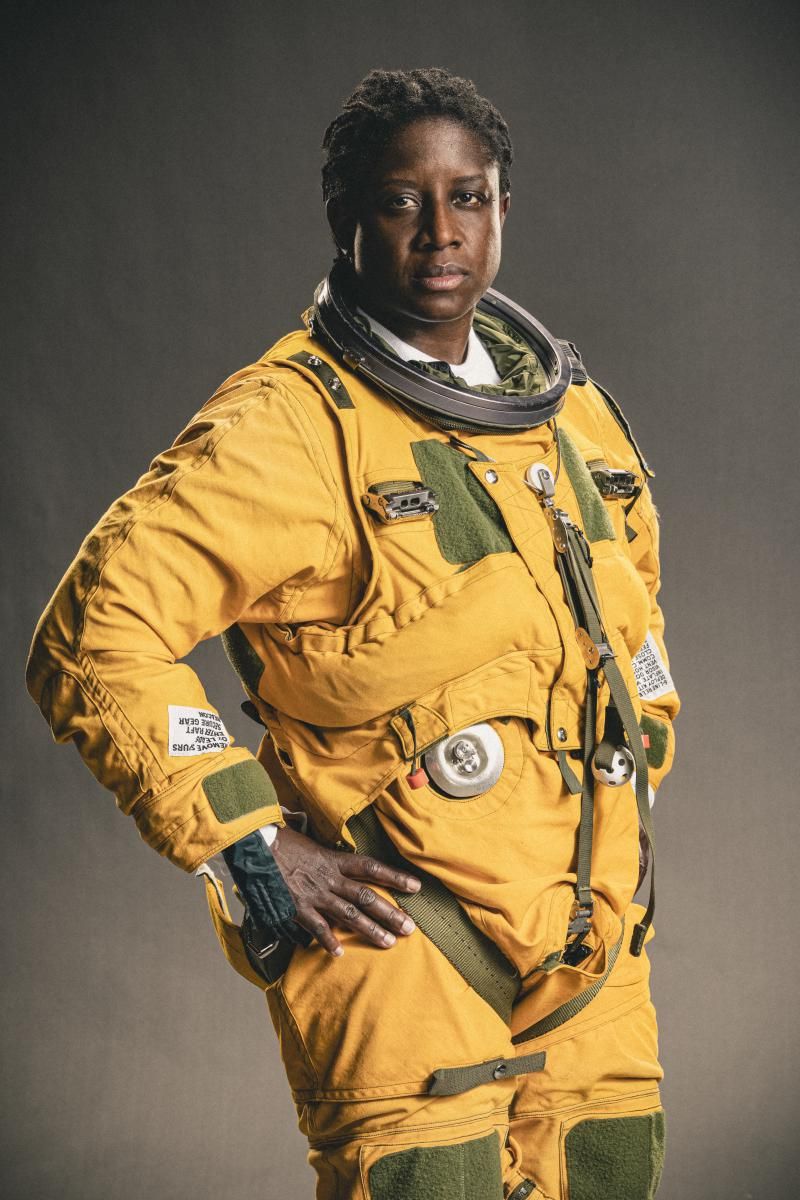 Merryl Tengesdal from the CBS reality series Tough As Nails.

Merryl Tengesdal is currently a fitness trainer, but the 49-year-old Bronx native boasts some seriously tough cred: She's a retired Air Force Colonel, veteran, and the first and currently only African-American woman to fly the U-2 Aircraft. "The U-2 flies so high that you can see the curvature of the Earth," she says, "a spectacular sight that few get to see and experience."

She's humbled and proud to have served her country for 23 years, logging 3,400 flight hours in six different aircraft and over 300 combat hours. A victory would be very personal for Tengesdal: "I am competing to show my family, especially my foster daughter, that we are all capable of accomplishing great things regardless of where we may have started in life."

People might be surprised to learn that Liz "Knuckles" Nichols' job as a cement mason is an ancient trade. "The Pantheon is made of concrete," says Nichols. The 36-year-old mom from Oregon pours, finishes, and repairs concrete—sometimes as early as 3 in the morning. Nichols is definitely one tough momma! "I was rodding and troweling concrete at nine months pregnant."

Scott Henry from the CBS reality series Tough As Nails.

Scott Henry is loyal and goofy, but make no mistake—he's competitive. "I want to be the best at what I do," says the 40-year-old construction super from Utah. "I compete at a very intense level." His "geotechnical" job runs the gamut from lifting buildings to building retaining walls, repairing dams to stopping landslides!

Season 2 of Tough As Nails premieres Wednesday, Feb. 10 at 8/7c on CBS and Paramount+.